skip to main | skip to sidebar

Regarding integrating the new mitigation retrofit rule into the Existing Building Code during this upcoming glitch cycle:

There is a proposal to include, as an approved secondary water barrier, a closed-cell urethane foam (not Icynene) spray-applied along the truss/deck joints and all other sheathing joints from within the attic. If you don't have a clue how your inspectors will go about effectively inspecting such an installation you might want to take a look at the proposed language at:

specifically new section 611.7.2 (e) in this working draft. There is a meeting of the Wind Mitigation Workgroup this Friday in Tampa to discuss this, among many other issues.
Steve Pizzillo sfboa at 7:23 PM

Here is the link for the new BOAF newsletter:
http://www.boaf.net/pdf/BOAF%20Newsletter%20April%202008.pdf
Steve Pizzillo sfboa at 7:17 PM

This is to let you know that a hearing on Rule 9B-13, Florida Energy Code, will be held May 7, 2008 during the Florida Building Commission in Melbourne, Florida. Comments must be submitted in writing and received before May 1, 2008 or at the hearing on May 7. Please send your comments to ann.stanton@dca.state.fl.us and betty.stevens@dca.state.fl.us. Any comments received will be reviewed by the Energy Technical Advisory Committee they will provide comment at the hearing on May 7.
Steve Pizzillo sfboa at 3:00 PM

The Building Officials Association of Florida is currently rolling out their Public information campaign earlier than expected. The campaign, almost two years in the making, was originally going to be rolled out at the BOAF yearly convention in June at the Naples Grand. With the production of the posters ahead of schedule and the expansion of the campaign to t shirts thanks to England Enterprises the decision was made to send the posters out so local chapters can distribute them for Building Safety Week in May. The campaign is already receiving praise from around the country with the Building Officials Association of Minnesota seeking permission to use their own version of it. It is now up to every Building Department, Inspector, Plans Examiner and Building Official to push this campaign and this should include adding Different Jobs, Different Tools, Same Mission, Saving Lives to their signature lines on e mails.
Steve Pizzillo sfboa at 2:25 PM

Here is a summary of some of the bills that our legislative committee is working on.

Here are just a few items that are currently being watched and/or worked on by our legislative committee.

A Miami-Dade ordinance addressing crane safety was implemented in March 2008. It is a comprehensive regulation , unprecedented in the State of Florida, crafted to provide the greatest degree of life safety for the citizens of the County. A comparison of the Miami-Dade County regulation and the State legislation shows that the legislation put forth by the State is lacking. The State legislation is does not address many concerns that the Miami-Dade ordinance requires. To have seen the "sacrifice" that the most recent crane accidents have caused is all the more distressing now that the State crane safety legislation has gained momentum. In part, this is due to the fact that the status quo of the non-regulated crane industry. Furthermore, it is unacceptable that the State legislation effectively circumvents any attempts by local jurisdictions to enhance tower crane wind design, introduce oversight and enforceable inspections, or provide reasonable hurricane preparedness procedures. in effect, the State legislation eliminates the enhances crane safety provisions provided by recently enacted Miami-Dade County ordinance. This is why the South Florida Building Officials Association has come out for the Miami-Dade ordinance and asks the State to not enact a law that will null and void the County ordinance. We also encourage everyone to contact their State senators and impress on them to say no the bill being placed in front of them.
Steve Pizzillo sfboa at 4:36 PM
Older Posts Home
Subscribe to: Posts (Atom) 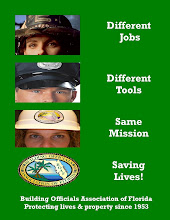